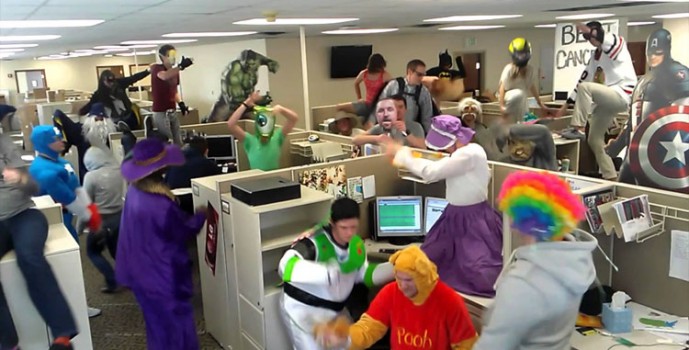 The Harlem Shake is the latest thing to go viral,  you could call it a twist on the flash mob theme, or moving on from Gangnam Style which now has over one billion hits!

It’s getting companies and organizations recognition by drawing lots of traffic to their sites via YouTube.

The Harlem Shake involves one person starting the activation off, then a large number of participants joining in and being as random as possible. The more bizarre your piece is, the more successful it will be. It’s theme filmed and posted online.

The Harlem Shake, not to be confused with the hip hop dance style, is the title of a 2012 heavy bass instrumental track produced by Baauer. In February 2013, the song spawned a series of dance videos that begin with a masked individual dancing alone in a group before suddenly cutting to a wild dance party featuring the entire group – this is the harlem shake. Despite what the name suggests, the videos present a wide range of hip hop dances, including the Bernie, Twerking as well as improvisations.

We have compiled some of the best Harlem Shake videos for you to look at, totally cool while having fun & drawing attention to your company or brand.